Dean Smith: Cutting Down the Net 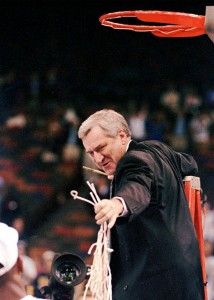 During this time of year, many people get very excited about college basketball. I do and always have. I grew up with parents who loved to watch their teams on TV or in person in those frenzied arenas known as Carmichael, Cameron, and Reynolds. They are called something different now. Only one is named for the great, and now late, Dean Smith. Ah, the Dean Dome.

My college days were spent at another school (East Carolina) in large part so I would not have to break my allegiance to the Big Three (Duke, NC State, or Carolina) and I could cheer for any of them when they played outside their Triangle. My Dad went to Duke. His Dad had a long and fulfilling career at NC State. My brother, sister-in-law, and their daughter all went to Carolina. What else could I do but go somewhere else? How could I choose?

Yet, one coach among those schools stood out for me. Dean Smith. Not because of the legendary stats, wins and records that he left in his wake – but because his approach to life made him inspiring, the only one among the lot whose very way of doing and being would truly give me pause and cause me to think about life.

Throughout his entire life – day after day, season after season – he ascended the ladder of life and snipped free the net of social injustice. For him, that was the true victory, the most precious title of all. Each thread of the net was met with the power and sharpness and strength of his gentleman’s blade, and he was deliberate and loving in the way he cut through any injustice he encountered.

Racial inequality. Objectification of women. Nuclear proliferation. Snip, snip, snip. If a political issue stood in the way of other human beings being treated equally, he bravely climbed the rungs and sliced through the binds.

Smith lived life knowing that every single human was created equal. That no one is more important than anyone else. That there is no room for egos in the Big Game. He served his players, his school and his state as a coach, mentor, friend, leader, father figure, trailblazer and unending source of awe and inspiration.

And he’d be the first to tell you, it was never about him. Even as he prowled the sidelines under the blazing white fluorescents of packed arenas, he shunned the spotlight. He led by this example, and instilled into his players a mantra of unselfishness that will always serve as the definitive example of Teamwork.

His was a mantra that we can apply to all aspects of our lives. In our families. With our friends. At our jobs. In service to our communities. Especially here at The Ivey. Pass the ball. Point in acknowledgment. Team and our members first, for the greater good.

And in the final plays of his life, he negotiated a memory-debilitating disease with all the grace and dignity of his greatest games.

We will never forget him. He will always be missed. And his lessons will endure forever.