Creating People Who Lead, Give and Care 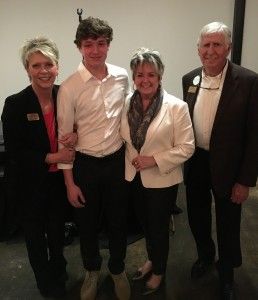 On November 11th, I joined several staff members and friends of The Ivey at a very special event in Charlotte. It was called “Connecting Charlotte,” a celebration of Charlotte non-profits, hosted by a wonderful organization called Playing For Others.

Playing For Others is having an immensely positive impact on teens throughout our city. Their year-round programs are “cultivating the next generation of innovative leaders, philanthropists, and compassionate human beings.”

The Ivey was one of the evening’s honorees, and we were treated to an incredible spoken word performance by PFO participant, Will Struckmeyer. (You can watch the entire performance on Facebook by CLICKING HERE.)

It was a powerful tribute. One of the standout lines in the piece was, “”The Ivey…a place that preserves my memories in a way that actually works.” It was truly amazing.

After the celebratory event, I found myself thinking about PFO’s mission, and about the “next generation” that they are grooming to live compassionate lives. It’s a mission that really speaks to my heart, and it feels immensely aligned with some of the reasons that The Ivey exists, too. To enhance people’s lives. To bring more compassion into the world.

And furthermore, let’s consider the fact that members of The Ivey were once teenagers, themselves. As were their caregivers. They were once “the next generation.” To me, it’s very moving to think about the cycle of life, and the way it plays out in front of our eyes every day, all around us.

I’m so appreciative for the honor that PFO founder and executive director, Jen Band, and her entire organization have bestowed upon us. Moreover, I’m deeply grateful for the difference that they are making in the world. Because from where I sit, the more people we have in the world who are leading with strength, living lives of generous giving, and exhibiting boundless compassion for their fellow man, the more beautiful this thing called Life can be.